This is the village that Mush Muli House (the house we have fallen in love with) sits in. We had already taken a brief drive through when first viewing the house but, after seeing off Nachko Nachko man and the-one-who-doesn’t speak, we decide to take a long stroll through the village. 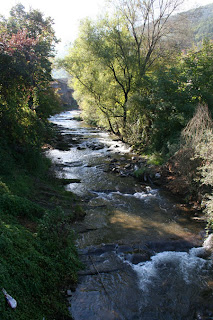 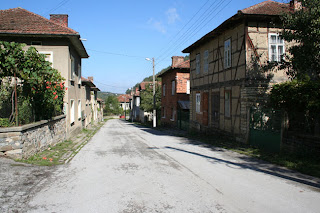 The village is a beautiful traditional village nestled between two mountains. It is surprisingly flat for a mountain village (hurrah, no dodgy steep tracks to drive up) and is quite narrow due to the flanking mountains. A pretty river runs through it which you can hear from the garden of Mush Muli House. It has been raining heavily for three days (no sign of flooding) but today is a lovely sunny day.

As we walk through the village people smile and say “dobar den” which means “good day”. All except one woman who just stares at us as though we are from another planet. There are no English people in the village itself. Our Bulgarian language skills - which currently do not extend much beyond “dobar den” - will have to get better, sharpish.

There are a view small shops, a post office, school and church. It’s the prettiest village we’ve seen by far – the river and flanking mountains give it a certain alpine flavour. It’s a bit like being in a suped-up lake district. Many of the houses are being or have been renovated and it is a popular location with Sofians who want a second home to escape the rat race on a weekend. Fifteen minutes in either direction are the towns of Yablanitsa and Etropole where you can pick up whatever supplies you need. Etropole even has a small ski run in the winter!

The people seem very friendly, if a little bemused by the English couple who have wandered way off the beaten track. Most are older people but we spy a few families in gardens and some younger people at the café.

Opposite Mush Muli house is the local pensioners club which looks deserted by day. Perhaps at night it becomes a thumping hive of activity and we risk rowdy pensioners vomiting in our front garden at chucking out time. I think that is unlikely. I think we have found our village.
Posted by Auntie Bulgaria at 12:27