70. Gardening and the art of compromise

Last year was our first summer growing veg; our first summer with a garden of our own. It’s brilliant when you eat your first home-grown courgette (not so much when eating your two-hundredth home-grown courgette). But, man, gardening is a lot of hard work. Weeds are outrageous little fuckers – and not in a ‘tsk, weeds, you cheeky little tinkers’ sort of way, but a ‘YOU WEEDS ARE TAKING OVER MY LIFE. I JUST WANT A WEEKEND TO MYSELF. DIE! DIE! DIE!’ sort of way.

So, this year, I wanted to do things a little differently. I had a vision of nice, organised raised beds (complete with chicken wire and newspaper bases to keep out the moles as well as weeds – oh yes, moles). I wanted pretty pathways with lovely creeping thyme growing in between the stones. And I wanted a rustic fence around it to keep our (future) chickens out.

In our house, what Claire wants, Claire gets. Ahem. I wish writing that down made it true. In reality we had so many arguments about how to do the veg garden. I tried explaining and sketching calmly what I wanted, then I took to manically shoving Pinterest pictures under Rob’s nose, chanting “See! See how pretty it will look!” Finally I resorted to my typical fallback of: “Why can’t you just do it my way? Why? Would it kill you?” In the end, we agreed that we would indeed do the veg garden my way (hurrah) and he would have utter free reign over the areas at the front and side of the house (uh-oh). The rest we’ll muddle through together. It’s a strange feeling, to compromise. I feel like I’ve forgotten to put my pants on or something.

Before we marvel at what Rob has built, I think it’s worth revisiting what the garden looked like when we bought the house, and the patch that we battled with last year. Bring on the garden timeline… 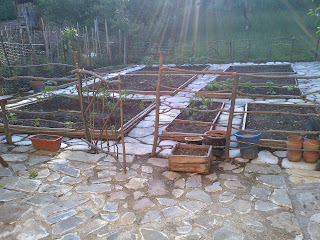 ﻿
Like many of our projects, it’s not completely finished yet. We need to build a compost bin in the big empty corner. We’ve only just planted the seeds for the creeping thyme in between the stones – so the path should look a lot softer in a few months. I’m not entirely convinced that the fence is really chicken-proof, but I guess there’s only one way to find out. And I want to dot flowers around in pots and as companion plants in the beds. I’m not good with flowers. I can name about five different kinds, at a push. I just never really understood spending all that time, effort and money on things you can’t eat. But I’m going to get my girly on and give this flower lark a go.

Best of all, the only thing we had to buy was concrete to make the ‘stone’ pathways. We built the fence out of sticks that were lying around the garden (we had a lot of broken branches from all the snooooow in our first winter – still have a huge pile of them). And the beds are made from wood that was already in the house.

This year we’re growing swede, broccoli, tomatoes, lettuce, squash, courgettes, potatoes, Jerusalem artichokes, asparagus, strawberries, and we have a few herbs dotted around. I’ve also got some sweet potato slips almost ready to go in. We’ve planted parsnips but they’re proving to be elusive buggers (I don’t know why, they were our most successful crop last year). And the empty bed nearest the terrace is earmarked for a couple of rhubarb plants. I’ve never even cooked with rhubarb - I’ve eaten it, I like it, I’ve just never bothered to cook with it - but as I am British and I have a veg garden, I feel it is my duty to grow rhubarb. Likewise with the Asparagus I guess.

Granted, it’s a bit of an odd mix of veg but we wanted to focus on things we can’t easily buy here. (Correction, of course we can easily buy tomatoes and potatoes at the market here. You can’t walk two feet in summer without walking into a tomato stand. But all our neighbours grow their own spuds and tomatoes and we want to blend in, like. It’s some weird, middle-aged version of peer pressure.) I miss sweet potatoes almost as much as I miss my family. Some days, more.

If this all seems rather smug and self-congratulatory, don’t be fooled. It’s just my way of pretending that the rest of the garden doesn’t look like this: 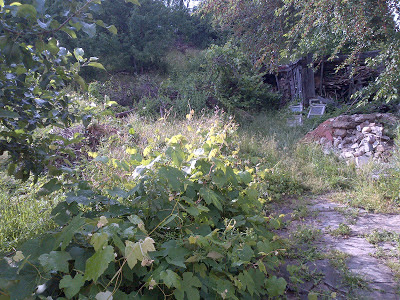 Posted by Auntie Bulgaria at 08:51