You know what marks the official start of spring for us? Is it the first spring flowers? No. Is it the first sighting of a stork? Nope. Working outside in a t-shirt? Blossoms on the fruit trees? The Game of Thrones trailer being released? No. Non. Ne.

To explain, I should go back in time a bit. Almost two years ago, we made ourselves an outdoor bread oven in the half-built summer kitchen that we were working on at the time. I was going to write about it back then, but wanted to wait until we’d properly finished the summer kitchen so I could share photos of everything together. However, what I didn’t take into account was the fact that we now live on Bulgarian time, so a job that we thought would take about four months still isn’t finished almost two years later. The summer kitchen is about 90% finished, which is good, but it’s been 90% finished for about a year, which is not so good. We really need to crack on and finish it, but Rob’s been doing all the building work himself and having to fit it in around other priorities. Anyhow, it will be finished in the next month. Expect glorious photos of a totally, absolutely, 100% finished summer kitchen in a month’s time. Or maybe two. After all, this is Bulgarian time.

Back to the pizza oven, which we did manage to finish. Ordinarily, I try not to eat too much bready stuff because it gives me weird pains all up and down my right side if I eat it too often. (Hypochondria alert.) But who can resist a homemade pizza every now and then (and, by every now and then, I obviously mean at least once a week)? I’m not exaggerating when I say being able to cook homemade pizzas in a wood-fired outdoor oven has transformed our summers (and springs, and autumns, and, er, waistlines). It’s so … theatrical. It’s the highlight of a weekend, firing up that bad boy and merrily paddling pizzas in and out.

We use it for other things too: baking cakes (many hours after first lighting the oven – at its hottest, it gets up to about 700°C), roasting veg, roasting tomatoes for our freezer tomato sauce, drying tomatoes, etc. But nothing quite beats shuffling a pizza in and dragging out a bubbling, volcano-like beauty three minutes later. Seriously, it’s way better than TV. You guys should try it.

If you’re looking for a detailed tutorial on how to build a pizza oven, I’m afraid you’ll be disappointed. You have to be surprisingly precise when building a pizza oven – you need to get the cob mixture just right, and the size of the door opening needs to be calculated in relation to the height of the burning chamber. I forget the specifics. Did I mention we did this two years ago? Just follow this handy three-part tutorial on YouTube, like we did.

Think of this as more of a photo diary of that funny time we built a pizza oven, back in lovely old 2015.

First, we dug up some clay from our garden and squelched around in it, mixing in sand and, I think, straw. Honestly, my memory is not what it used to be. I vaguely remember this stage was very fun. 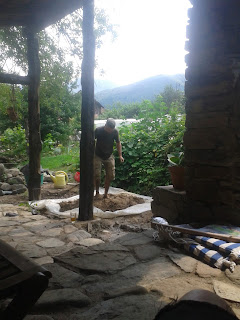 We got lucky with a huge, beautiful and totally flat piece of stone that we found in our garden. That formed the base to cook pizzas on. On top of that, we built a dome of sand covered in brightly coloured magazine paper (because, when you eventually dig out the sand, you know to stop digging when you reach the coloured paper). Here Rob is layering up the clay mixture on top of the sand dome. 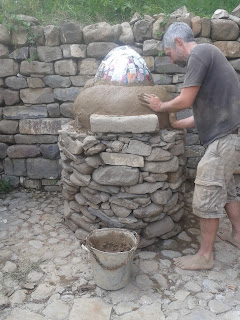 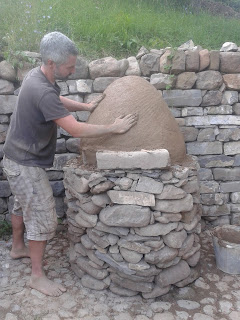 Then he shaped the entrance to fit around a door that he’d made in advance. 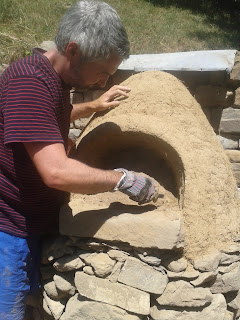 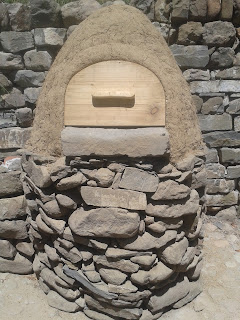 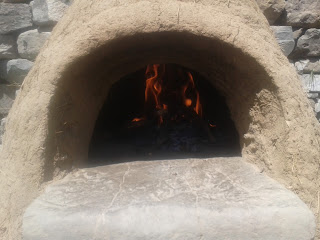 We then covered the whole oven with a layer of lime plaster, to give it some weather protection, as it was in the open part of the summer kitchen, without a roof over it. Two years later, we’ve decided to put a roof over that area, as we want to add a worktop and stove and turn it into a proper outdoor kitchen. Once the roof is done, and we no longer need to worry about the pizza oven getting wet, we’ll probably chip off the lime plaster, which has cracked and isn’t as attractive as the clay anyway.

You don’t have to make a huge egg-shaped oven, like us. Cute little round ones are just as lovely and effective. But I rather enjoy its alien-pod quality. I keep expecting it to crack open and Robin Williams to emerge.

Then, after all that, we made a lot of pizzas. For two years. 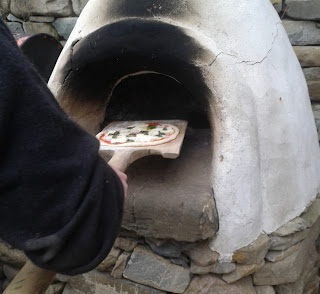 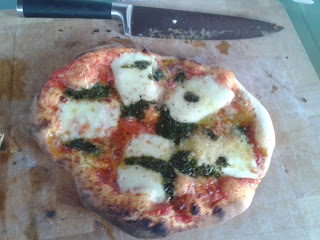 Posted by Auntie Bulgaria at 07:47