Freaking hell, it’s August. How did that happen? Here’s a not-so-brief rundown of what we’ve been up to lately. For those who are short on time, this post can be neatly summarised as follows:

For those who are committed readers/avoiding work/just too nosy to resist, read on…

Gardening bore
I refuse to share too many pictures of the garden right now as it’s looking like an enthusiastic community project gone wrong. Normally the weeding is my domain but I’ve been working so much I’ve not had the energy to get out in the garden Monday to Friday. And, frankly, I’ve been neglecting it on weekends in favour of going on fun/terrifying day trips (more on that later).

But we’re slowly wrestling it back under control. We’ve done loads of tidying in the veg patch this last week, and the flower borders and polytunnel will be tackled over the next week. Speaking of the wonky polytunnel, we’re not having a stellar tomato year. I mean, they’ve been fine, but we’ve not had the crazy quantity we usually have and the plants are much more blighty than usual. We’ve only just cooked down our first batch of passata for the freezer – whereas, this time last year, we’d already done a few batches because we were so overwhelmed with tomatoes.

The courgettes are more than making up for it, though. Saturday we had a pile of at least 15 on the kitchen worktop, all of which were used up in a heroic display of cooking (biggest batch of courgette fritters ever) and freezing (grated courgette for cakes) by Rob. The weekend before that, I made three courgette cakes – yes, THREE courgette cakes – in one day: one for us to eat straightaway and two for the freezer. As a result of all this madness, I’m now too scared to open the chest freezer. Surely there’s nothing in there but courgettes? No good can come of this.

Glozhene Monastery, near Yablanitsa
We love a monastery, we do. Anyone who’s been reading this blog from the beginning (just my mum?) might remember the road up to Glozhene Monastery made me weep into my steering wheel, back when I was a namby who wasn’t used to driving in Bulgaria. Even now, six years later, as a namby who is used to driving in Bulgaria, the thought of driving up that busy, narrow road again didn’t exactly fill me with delight. 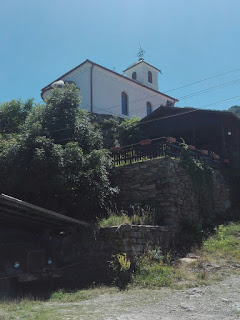 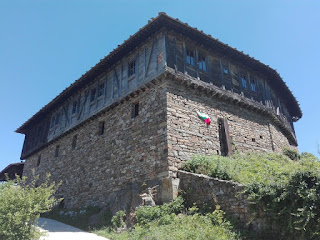 A 'walk' in the woods
‘Let’s do a little walk,’ I say to Rob. ‘Let’s go back to the national park and hike up to hizha Benkovski.’
He looks at me with suspicion. ‘How far is it?’
‘I don’t know exactly, but this book says it takes less than three hours.’ *Brandishes official-looking hiking book. Whips it away before he can read it*
‘Okay then.’
‘Yay, nature day!’

And so began our ‘little’ hiking adventure, which turned out to be a 10-hour nightmare. The three-hour walk up to the hizha turned out to be five-and-a-half hours (although we did rest for about half an hour of that, and I also stopped for several mini-meltdowns along the way). A good two hours of that was climbing a narrow track that was so steep we had to constantly use our hands and grab onto tree roots to haul ourselves up.

It was also incredibly isolated – we only saw two other people the whole way up and no one at all coming down. We were planning to arrive at the hizha just after lunch and spend a couple of hours relaxing before coming back down. What actually happened was we finally arrived just before 4pm, had a quick drink then turned straight around to make the trek back down before it got dark.


Coming down was worse. It was so steep and slippery, we never would have been able to make it without poles (or, in our case, sticks from the forest). On the steepest part, we just abandoned all dignity and slid down on our bums. But the worst part was when, just as it was starting to get dark, we lost the trail markings for a bit. Not long, only five minutes, but it was a shit-scary five minutes, I can tell you. We had some food and plenty of water on us, but no torch or warm clothes (in our defence, we thought we’d be home late afternoon). After a bit of backtracking, we found the markings again and carried on the rest of the way without a hitch.

We made it down in four-and-a-half hours and got back to the car 10 minutes before it got dark. As proof that we were so focused on making it out of the forest alive, I didn’t even notice I had a blister the size of a golf ball until we got back to the car. Thank goodness I work from home and didn’t have to wear, you know, shoes for the next four days.

Has this put us off hiking alone in the wilderness? Oddly enough, no. Because, no matter how long and hard it was, we still did it. And that felt amazing. But, the next time we go off on ‘a little walk’, I’ll be reminding myself of these key lessons:

Posted by Auntie Bulgaria at 01:02