152. The one where we go to a Bulgarian football match 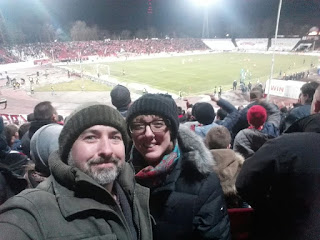 We had family staying last week and their big wish was to go and see a Bulgarian football match. I’m not a football lover, as you might have guessed, but I’m up for anything that creates good blog fodder. And, as luck would have it, CSKA Sofia were playing Ludogorets in the Bulgarian Cup Quarter Final, so we trouped off to Sofia to watch a little footie.

The last (who am I kidding, the only) time I went to see my home team in England, Pompey were FA Cup holders and you couldn’t get a ticket for love nor money. We only managed to get tickets because someone we knew couldn’t go to a match. But in Bulgaria, even for a cup match, we just wandered up at kick-off time and bought four tickets.

Then we were subjected to a suspiciously thorough police search at the ground’s entrance (only suspicious because, as we’ll see later, certain people can obviously bring whatever they like into the stadium). The policeman even leafed through every note in Rob’s wallet. If he was hoping for an ‘offering’, he must have been disappointed – we just waited patiently for him to finish.

We’d read in advance not to go in Sector G, behind the goal, because that’s where the ‘ultras’ go. Much as I like entertaining my readers, infiltrating hardnut football fan gangs is a step too far. So we went slightly off to the side of Ultra Territory, and stood up at the very top of the stand. (It’s basically a free-for-all once you get in the ground and you just stand wherever you can find a spot. There are seats, but everyone stands on them for the whole match. Good luck telling this lot to sit down.)

The atmosphere was cheerfully rowdy, complete with a full-time drummer (who was doing rock’n’roll scissor kicks and everything as he drummed. Legend), and an MC who worked the crowd into a frenzy and demanded constant singing. We learned quite a few songs, and, where we didn’t understand the words, just made the right sorts of sounds. A shit-load of toilet paper was thrown onto the pitch at regular intervals. Some football was played. CSKA scored quickly. Hurrah! Ludogorets scored after that. Boo! I gather the ref was a nightmare. I could tell half-time was approaching when the police on the sidelines put on their riot headgear to escort the Ludogorets players down the tunnel. Half-time came. The score was 1-1.

Huge sheets of red paper were handed out during half-time, so the whole crowd could greet the players with a sea of red at the start of the second half. Well, I say the whole crowd, the 20 Ludogorets fans present didn’t want to participate. Spoil sports. Then, on cue, and all in perfect synchronicity, the sector G fans lit their flares. 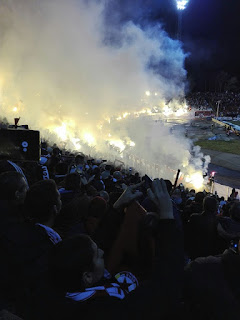 Now, I’ve seen European football matches with flares on the telly and it looks batshit mental and scary on the screen. But in real life, it was beautiful, especially when they all lit them at the same moment. Don’t tell anyone, but I got actual goosebumps. Then it all got a bit smoky, obviously.

More toilet paper was lobbed onto the pitch. So was a lot of screwed-up red paper. More songs were sung. Blah, blah, blah, football was played. But there was this incredible moment in the second half when Ludogorets hit the bar and, with the goal empty (I can’t remember where the keeper was, but he wasn’t where he should have been), the ball bounced down painfully close to the goal line. A CSKA player rushed in and kicked it away, and the whole crowd ooofed in relief. The man in front of me turned round and screamed, ‘What are the chances?!’ Yes, my friend, my smiling nod responded, luck is indeed on our side tonight. Isn’t football fun?

With that little hiccup out of the way, the full-time score was still 1-1, and, it being a cup match, it went to extra time. We were certainly getting our 18-lev’s worth. There was a short break, just time enough for the male fans to climb to the top of the stand and have a piss through the railings into the park below, while the few women present watched jealously and jiggled uncomfortably. (Ladies, you just have to hold it in.) Then it all started again. The drumming, the singing, the toilet rolls. A little more football.

Thankfully, CSKA scored in the first half of extra time, and held onto the lead. CSKA win! Everyone’s happy! We obvious tourists can escape the ground unharmed! Hurrah! I’m joking, of course. The atmosphere in the ground was brilliant, and we saw no sign of trouble. We enjoyed it so much we’ve already decided to go to more CSKA matches. (Not a Sofia derby match, though. We’re not total idiots.) There’s no chance of us choosing another team, now. Not now we’ve already learned the songs…

There ends the tale of our little football adventure. And, unless I’m gripped with blogging fever over the Christmas break (unlikely, as I intend to spend the week in a pastry-and-prosecco-induced stupor), here ends Auntie Bulgaria’s dispatches for 2017. Thanks for reading, you sexy beasts, and here’s to an adventure-filled 2018.

Posted by Auntie Bulgaria at 01:06