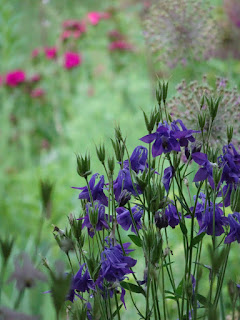 I do hope you like lists as much as I do, because that’s basically what this post is all about. What did you expect? I am a literal Gardening Bore.

So, *cracks knuckles in anticipation*, this year in the veg/fruit garden we’re growing:

Over in the flower garden
We’ve been gradually expanding our flower borders by dividing our trusty perennials, saving seed wherever we can, and investing in lots of bulbs. Thrifty, like.


And there are others that I can’t remember/can’t see from my desk window and can’t be bothered to go outside and look.

Phew! Well, that’s my list fetish satisfied for a week or so (maybe, if I’m lucky). I hope it was good for you, too.

Oh, also, we’ve bought a new camera (as you might be able to tell from the difference in quality between the first photo and the others taken on my phone), so expect many, MANY more visual Gardening Bore updates this summer.
Posted by Auntie Bulgaria at 06:45