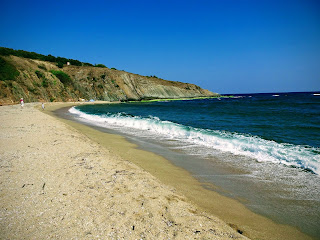 Yes, we went to Sozopol and Sinemorets on holiday. Again. I know, I know. We’re getting a bit stuck in our holiday ways as we get older.

Every year we say, ‘Let’s go somewhere we’ve never been before. Albania! Macedonia! Georgia!’ Yet we nearly always trundle off down the motorway to Sinemorets. There’s just something very lovely about going back to a place you know so well, it feels like coming home. I blame my parents, for taking me on the same (albeit wonderful) Isle of Wight holiday every year when I was a kid.

Sozopol
We’ve only ever been to Sozopol in June, when it’s fairly quiet, so we were shocked at how much of a resort it is later in the summer. There were holidaymakers everywhere. We even saw shirtless English men walking around grumbling about how the food in every restaurant was the ‘same old, same old’. *shudder*

Luckily, we were only there for a night, and were in a very quiet little guesthouse in the Old Town. I mean, Sozopol is gorgeous, and it’s always worth a visit. But maybe go in the off-season. 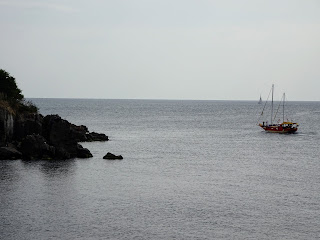 Sinemorets
Ah, sweet little Sinemorets. Just a random little village by the sea, a few kilometres from the Turkish border, where half-built hotels sit on windy cliffs overlooking gorgeous sandy beaches. If that sounds a bit strange, it is. There’s not much to do there other than enjoy the beaches and sip G&Ts overlooking the water. It’s my idea of heaven.

We noticed there are more and more Brits coming to Sinemorets now. But the resort is still sleepy and largely unchanged from when we were last there two years ago. There’s now a supermarket, which is convenient. (Even if it was randomly blaring out really loud rap music. I was a big rap fan in my teens, but it’s definitely not conducive to shopping. You try choosing a suitable box of tampons in what feels like a really aggressive, well-lit nightclub.) And, to our utter delight, a craft beer shop has opened by the village square. Otherwise, the place was pretty much the same. (‘Same old, same old,’ as some miserable fuckers would say.)

If you go to Sinemorets, maybe avoid Butamyata beach. It’s beautiful and clean and has fun watersport stuff, but it’s the busiest beach in the village by a mile. We prefer the northern beach, the one where the Veleka River empties into the Black Sea. Stunningly beautiful, very quiet and charmingly European, with plenty of naked penises enjoying their day in the sun.

Lipite beach (reached by climbing up over the rocks at the end of Butamyata beach and taking the cliff path for about 15 minutes) is also quiet and wild. Again, no clothes required.

Anyway, that’s our fun-in-the-sun over for 2018. Next year, next year, we’ll definitely go somewhere new. The Albanian coast, maybe. Lake Ohrid in Macedonia, perhaps. Or possibly hiking in Georgia. But, to be honest, Sinemorets is already calling us back…
Posted by Auntie Bulgaria at 07:04