174. Kittens with dirty bums, and other stories

You’ll have to forgive the slightly sporadic posting of late. Work is busy busy to an almost oh-dear-I’ve-slightly-overcommitted-myself level. Which, as someone who has zero problem saying ‘no’, is unusual for me. Still, I’m not complaining. Work is what keeps us in cake, kittens and Ikea rugs, after all.

We’re still diligently catching up on Bake Off every week and baking something inspired by the programme most weekends. Last week was vegan week, which isn’t really our bag. But based on a vegan mocha cake that Briony made, I baked a (non-vegan) coffee and walnut cake, made with walnuts from our garden and coffee from … well, Lidl, obviously. 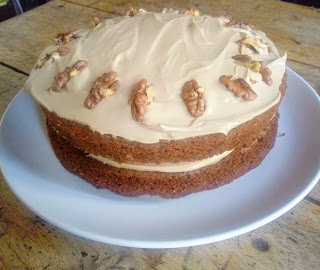 I always enjoy sharing our cakes with the neighbours. You never know what their reaction is going to be. Bulgarian cakes in the shops tend to be glossy, heavily decorated concoctions that, to my mind, don’t really taste of anything (which, as my style and life icon Prue Leith would agree, means they’re not worth the calories). So my homely English cakes must look really plain in comparison. Then there’s the issue of our neighbours’ incredibly sweet tooths (tooths? teeth? There’s no way to say it in this context that doesn’t sound weird). One time I made this delicious Nigella lemon meringue cake that was achingly sweet. But because it had lemon curd in it, they complained it was too sour. So, anyway, coffee in a cake was a risk. But they demanded I made another one for the next day (I didn’t), so I think that means they liked it.

We have so many walnuts this year. We’re lucky enough to have two trees in our garden and one just outside our boundary that drops half its payload in our garden. This has probably been our best walnut year ever and I reckon the crop will easily last us two or three years. Looks like I’ll be baking a lot of walnut cakes, walnut bread and walnut pie (if that’s even a thing?) this winter.

Merlin and Baxter, our new kittens, are settling in well. They’re a nightmare with food. (Baxter has even eaten some shelled walnuts that Rob left on the table for two fucking minutes while he went to the loo. That can’t be normal.) And they get really manic around 9pm at night. And they keep trying to sit on top of our precious house plants. But look how cute they are.

You know what’s a brilliant thing to do when you’ve got new kittens? Totally redecorate your lounge, so that you can’t use it for a month while concrete and new flooring is laid, have four cats living in the kitchen in the meantime, and then, when the upheaval is over, let manic kittens loose on your lovely new things. Great idea. Highly recommended.


Gone is our dangerously bumpy old floor in favour of actual nice tiles. (The selection of tiles used to be awful in Bulgaria – really nasty, shiny things that Del Trotter circa 1985 would have loved – but it’s got so much better. Amazingly, we didn’t even have to travel to the big smoke of Sofia to get these lovely tiles; we found them in Botevgrad.) The tattered (but good quality, so I’m not getting rid of it) sofa has been covered with second-hand throws and blankets, and cheap cushion covers from Ikea. The pictures are drawings of Sofia that we picked up in a second-hand bookshop last winter for 15 leva. And we’ve splashed out on a gorgeous yellow rug to finish everything off, but it’s not going anywhere near that floor until the kittens stop being arseholes and learn to clean their bums properly. #LifestyleGuru
Posted by Auntie Bulgaria at 00:24