The boomiest of booms (also, cake)

Ah, June. A great month for those Brits in Bulgaria who love wanging on about the weather. (So that’s all Brits in Bulgaria, then.) It’s hot and sunny one minute, then you hear the familiar rumble of thunder rolling in over the mountains, then before you know it, the road is a river, there’s water coming into the house in various places and the garden is getting pummelled.

Not sure if anyone’s studied this, but Bulgarian thunder must be the boomiest in the world. I don’t know if it’s because we’re in a narrow village that weaves between mountains – so the thunder reverberates around – or the general lack of other noise (except cars, tinkling sheep and chainsaws), but the thunder here is LOUD. In the old days, it used to make me cry out and spill whatever alcoholic beverage I was holding (I’m usually holding one). Now, we just give each other a look that says ‘Blimey, that was another big one.’ Each storm seems to circle above us, then move away, then circle back for a final flourish. BOOM!

Yesterday’s storm was the biggest of the year so far. When it storms, most of our cats either come home or find somewhere dry to hide in the garden. Not Baxter. Ordinarily, Baxter is our smartest cat, an evil genius who has somehow learned to unlock our locking cat flap. But when it rains or there’s a storm, he’s the only one guaranteed to come in sopping bloody wet. And immediately try to jump at us for a cuddle. I think he does it to torment us.
God knows how bad the garden looks today after yesterday’s storm. It’s almost midday and I still haven’t been outside to inspect the damage. Our tomatoes had no protection from the hailstones. And I hadn’t got around to staking the taller of the foxgloves. It probably looks like a dystopian wilderness out there. And it looked so pretty before the storm… 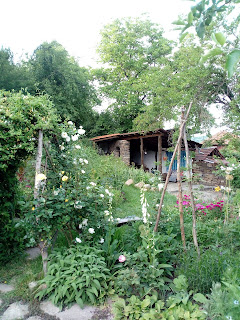 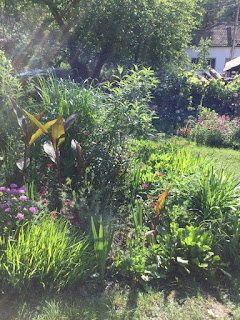 I suppose I’ll have to brave it after lunch, head outside, and try to salvage floppy, bedraggled plants wherever possible. (And do the daily snail hunt. Bastards.)

Speaking of lunch, Rob made this delicious toffee apple upside-down cake the other day. It’s egg-free, dairy-free and looks as pleasing as an Orla Kiely bag. (Which is very pleasing.) 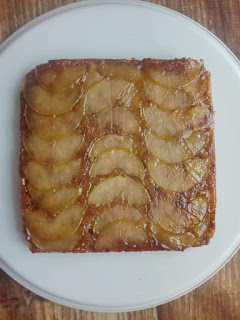 He also made – he’s been getting more into baking lately, which is great for me as I get all the pleasure of cake with none of the mess of making it – some fab peanut butter banana bread blondies. These were so good we didn’t even take a picture before falling upon them and devouring them, like a small but no-less-efficient pack of hungry wolves. Highly recommended if you want a different take on the lockdown banana bread cliché…
Posted by Auntie Bulgaria at 02:10