I’ve not written about the house for ages. Partly because I don’t want to be all ‘blah, blah, curtains’ and other girly awfulness. (I get all of that out of my system on Pinterest.*) But also because it’s been a long, slow process getting the house to its current state and I bore myself going on about it. That’s not to say it isn’t rewarding renovating a house. It is. It’s just the novelty of living in a renovation project wore off sometime around Christmas.
But now, finally, we’re really getting there. Rob has been beavering away on the downstairs and it’s now pretty much finished. It’s like living in an actual house.
The kitchen is a triumph! It is perhaps very bad form to praise your own kitchen so highly, but I don’t care because I have the best kitchen ever. Rob has built beautiful storage cubes out of lime plaster and topped them with local pine to create worktops. We searched high and low for our terracotta floor tiles, but they were worth the hassle. A rusty old woodburning stove has been painted deep red and topped with wood to create extra worktop space. And an old chest has been turned into a nifty cupboard. We’ve tried to reuse materials that were already here and not buy too much new stuff.


The lounge is lacking our furniture so you’ll have to use your imagination here! The old beams have been exposed everywhere downstairs and Rob has re-plastered the walls with traditional lime plaster. We’ve used some stone from the garden for the lounge floor, which is lovely and cool in the summer but might not seem such a great idea come winter! We’ve bought another woodburner for here though (even though there is a radiator heated by the big woodburner in the kitchen). And we’ll chuck down a million rugs or dogs or something to cosy it up more.
Off the kitchen is a separate pantry. I’ve always wanted a pantry. My Nan has one, which us kids always called the “cubbyhole”. I used to hide in there and sip the cooking sherry, pretending it was my own tiny, windowless house – which is sort of a depressing game for a child to play. Perhaps it was a premonition of some kind. Or maybe I was just a really weird little person.  Anyway, now I have my own pantry and I haven't once hidden in it.
The bathroom is very clean and grown up and, erm, white. We would have liked some colourful Moroccan-style tiling but this is Bulgaria and you can only have tiles off the 80s so we stuck with plain white. Nice though.
Upstairs there’s still plenty to do, particularly the study, which needs a lot of work. Currently it’s a room with an earth floor and bare brick, single skin walls that you can see daylight through (for some reason this is the only room in the house with really thin walls). Our bedroom and the guest bedroom are quite liveable after nothing more than a lick of paint, but they will eventually need re-plastering and new flooring.
And that just leaves the staircase. Yes, this is still on the outside of the house! After the study is done, the staircase (finally) becomes top priority. Downstairs we’re going to brick in around the staircase to make a little hallway with doors out on to the garden and also into the kitchen. The stairs lead to a balcony and a door into the upstairs hallway. We might leave this open as a balcony for now, but eventually we’ll glaze and brick this area too and it will become my ‘knitting landing’. Uh-huh, that’s a landing where I’ll sit in my papasan chair and knit. One day. Assuming we will ever finish this house.

*As a scrapbooking geek, I ADORE Pinterest. I’ve got tons of projects lined up for Rob thanks to Pinterest! I bet he cannot wait to get started on an arbour made of twigs, a raised flowerbed made from wine bottles, and a DIY patio day bed!

PS. As a reward for making it this far through my post. Here's a picture of a donkey with a fringe. You're welcome. 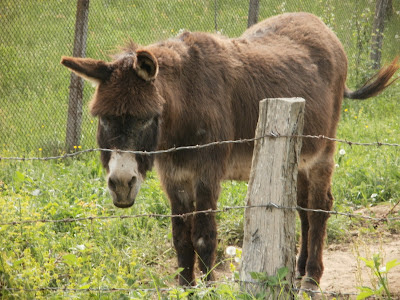 Posted by Auntie Bulgaria at 12:39