81. Snakes and housing ladders and other imaginary worries 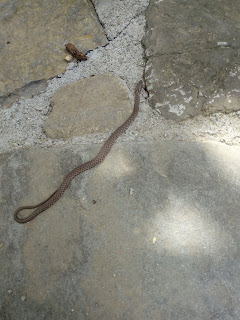 My anxiety has been a little woo-hoo lately. (When you read ‘woo-hoo’ imagine me doing bug eyes and waving my fingers in the air). It goes like that sometimes. In Bulgaria you really just have to go with the flow, which is not only a dickish phrase but also a difficult thing for a control-freak like me to get used to. I’m pretty good at it now though. (Example: I fully accept that dinner in a restaurant will take anywhere between 15 minutes and two hours to arrive and dishes will arrive in random order and all at different times.) But I do find my need for control manifests itself in the weirdest worries and obsessions.

For instance, my current list of concerns are things I never worried about, or ever even thought about for a second, before we came to Bulgaria:


It’s not Bulgaria’s fault. No one else here seems bothered by this stuff. Everyone else I know can walk past a pile of rocks without visualising being bitten by a viper. It’s me. I invent Things to Worry About.

So, whenever I find myself eyeing that pile of rocks or performing hourly tick checks, it helps to remind myself what I used to stress about in the UK. At least my Bulgarian-based worries have a whiff of danger and excitement about them – it’s better than this boring arse bunch:


Now that I’ve got that out of my system, I’m off to smell the roses. Literally. I like wandering around the garden in the afternoon running my fingers through the asparagus ferns and sticking my nose into stuff. I enjoy these moments even though danger lurks at every corner. I’m brave like that.

* If I do run into a snake, I’m borrowing Samuel L. Jackson’s immortal line, ‘I have had it with these mother fucking snakes. It’s time to open a window.’ It won’t really work because we won’t be on a plane (or at least I bloody well hope not), and there won’t be a window for the snake to get sucked through, and it’ll probably just bite me. But we can all have a jolly good laugh about it. You know, while we wait for the ambulance to arrive.
Posted by Auntie Bulgaria at 08:48