Not dry as in sober, you understand. (Number of alcohol-free evenings in the past week = a pitiful 1. Instead of cutting back in the weeks after a holiday, our alcohol consumption tends to notch up a gear for a while.)

Dry as in no water. I can’t remember when it last rained. Sometime in July? Much as I love a dry, sunny spell, our poor garden is one step away from becoming a feral desert à la Mad Max: Fury Road.

I’ve said before how stingy we are with watering. What this means in practice is:

Partly this watering routine is a time/effort thing – we just have too many beds to be watering them every five minutes. Partly it’s our gardening ethos – we want robust, tough plants that can largely fend for themselves and don’t need mollycoddling. And partly it’s environmental – I don’t want to be a lecture-y dick about it, but water is precious, right? (Also a handy excuse for not washing so much).

Needless to say this routine has gone right out the window this August and September. Everything is struggling. We’re spunking water left, right and centre, just to try and keep things alive (we’ve given up on the garden looking ‘good’ for now, just ‘alive’ will do).

There have been casualties. Some of the cosmos have given up and browned off to nothing (a shame as they’d otherwise go on flowering until the first frost). I’ve lost a few cuttings from my favourite dahlia. And the courgettes are refusing to give us more than one or two fruits a week, even though we’re lavishing them with water, comfrey feed and positive affirmations.

It’s not all bad news, though. The butternut squash have been LOVING the heat. I mean, the leaves are constantly droopy, no matter how much we water. But the fruits are massive.


We’re also having a good grape year. Normally either our white grapes do well, or our red grapes do well – rarely both in the same year for some reason. But this year, both are happy. As am I, at the thought of all that lovely wine. 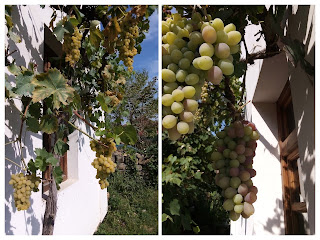 And the leeks are stonking, even though they’re a thirsty crop.

If there’s one lesson we’ve learned from this dry spell, it’s that we seriously need to improve our soil. Don’t get me wrong, our soil is good. It’s rich but drains well. It holds moisture fairly well but is rarely waterlogged (even in the June downpours). It’s not too stony. It’s not hard to work. We’re lucky. But we also take it for granted, and maybe haven’t looked after it as much as we could have. We spread a miniscule layer of compost on the veg beds each spring (and this year we didn’t even get around to that). The flower beds get nothing. Next spring, and every spring after that, we’re going to add as much compost and leaf mould as we can spare, everywhere.

Anyway, how’s your garden holding up in the heat?
Posted by Auntie Bulgaria at 02:18